Bus services in Carlisle were originally operated by several small independent operators, however by the 1920s, the situation had become somewhat chaotic in the city. At one point, 47 different operators ran a total of 74 buses, all of which were competing for business in the city.

In 1931, proposals were accepted by the traffic commissioners for Ribble Motor Services to purchase most of the small local bus operators and the city's tram system. The tram system comprised of six short routes radiating from the city centre had opened in 1900, but by 1931 it had become inadequate as the city had expanded well beyond the reach of the six tramway routes. The purchase of the local bus operators and the tramway by Ribble went ahead and a new network of bus routes was introduced on November 1st, 1931. Ribble then moved quickly to close the city's tramway and did so just three weeks later on November 21st – it had been originally anticipated that the tramway would stay open until spring 1932.

Carlisle was now served by a network of bus routes operated almost exclusively by Ribble, a situation that was to last for around 50 years. The one anomaly in Carlisle’s bus services was the route to the city’s Botcherby suburb, which was operated by United Automobile Services, until both Ribble and United were nationalised by the Labour Government in 1969 and became part of the huge National Bus Company. This meant that Ribble, along with other bus companies up and down the country, lost much of its individual identity and the deep ‘cherry red’ livery of Ribble gave way to the lighter ‘poppy red’ standard colours of the NBC.

By the 1980s, now with a Conservative Government in office, deregulation and privatisation of bus services in Britain was firmly on the agenda. As a precursor to this, the Ribble subsidiary of NBC (which was deemed to be too large) was broken up, and services in Carlisle passed to the Cumberland subsidiary of the NBC in early 1986, thus ending over 50 years of Ribble buses in Carlisle.

Deregulation of the United Kingdom's bus services came into force in October 1986 (the Transport Act of 1985 had paved the way for this) and Cumberland adopted a smart ‘Ayres red and sandstone’ livery for its vehicles – as worn by our bus, F805FAO. Cumberland was privatised the following year in 1987, with Cumberland’s own management and Stagecoach Holdings both making bids to buy the business, with Stagecoach being the successful party, completing the purchase on July 22nd, 1987.

Since Stagecoach's purchase of Cumberland in 1987, they have been the dominant operator of buses in Carlisle, making changes and refinements to services or the years. Stagecoach have also renewed their bus fleet at regular intervals, F805FAO being one of the first new vehicles bought by Stagecoach for Carlisle in September 1988. The livery Stagecoach originally used for its buses was mainly white with red, orange and blue stripes, and latterly this has been updated using the same colours but with less white and ‘swoops’ instead of stripes.

Local bus services are run by Stagecoach and Reays, with other operators such as Arriva North East and Borders Buses also running into the city from outside of the region. Stagecoach Cumberland now operate under the name Stagecoach Cumbria & North Lancashire and run over 20 routes in and out of the Border City from their depot on Willowholme Industrial Estate.

The network remaining largely unchanged since Ribble left the scene, consisting of a mixture of cross-city and cross-country routes. Many of the newer independent companies have offered both new routes and rival bus services to the people of Carlisle.

The bus station, of seven stands and a travel centre is situated on Drury Lane just off Lonsdale Street in the city centre. The present station was built in the 1990s to replace a larger station that was partially on the same site and had access from Lowther Street where the Earls Lane shopping area is now.

Over the past decade increased efforts have been made by the Government to make public transport more accessible to all, in particular those who are disabled and restricted to a wheelchair. The regulations that govern access to service buses are known as the Public Service Vehicle Accessibility Regulations (PSVAR), which have been applied to all new public service buses for local or scheduled services to carry more than 22 passengers. With this Carlisle has seen an increase in accessible buses over the years, a change which was promoted nationally both by the Department for Transport and the Disabled Persons Transport Advisory Committee. A staggered approach to applying this legislation has resulted in towns and cities like Carlisle to only operate compliant buses which can accommodate wheelchair users. 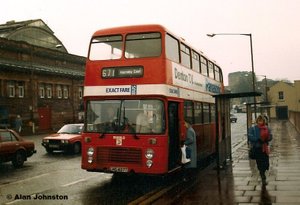 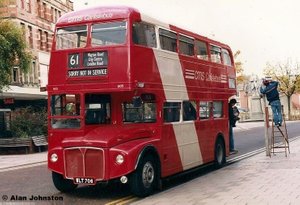 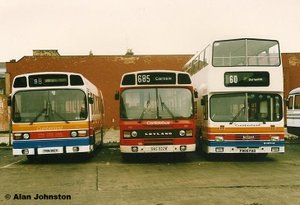 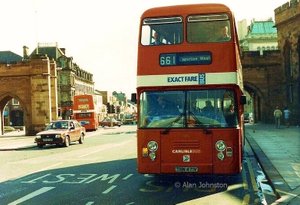 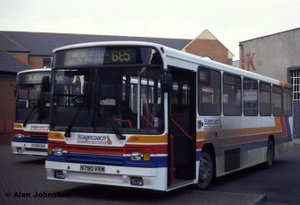 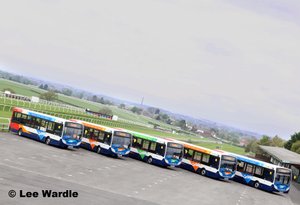